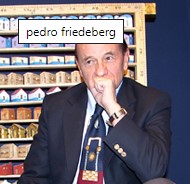 “I admire everything that is useless, frivolous, and whimsical. I hate functionalism, postmodernism, and almost everything else.”

Over six decades, Pedro Friedeberg’s artistic career has yielded paintings, sculptures, drawings, furniture, murals, book illustrations, set designs, and “useless objects.” The product of insatiable appetite and boundless imagination, Friedeberg’s output is mythic. He combines neoclassical drama with occult symbols, psychedelia with Meso-American imagery. A pastiche of East and West, high and low, religious and secular—the results are dizzying and the vision is singular. Friedeberg’s work, whatever the medium, is immediately identifiable. And wherever it may be found, it displays his irreverence and ingenuity.

Born in Italy to Jewish parents, Friedeberg emigrated to Mexico at the start of the Second World War. After studying architecture at the Universidad Iberoamericana, Mexico City, for several years, he abandoned his degree in pursuit of a nascent fine art career. But architecture remains the dominant theme of his body of work: an obsession with symmetry, proportion, and geometry. Drawing influence from Gothic cathedrals, Aztec pyramids, and Hindu temples, Friedeberg bends the spatial organization of monumental structures toward his own logic. Here as elsewhere, he hops across space and time on a whim.
Friedeberg was a member of Los Hartos, a group of twentieth-century Mexican surrealists. He is based in Mexico City, and his art may be found in public collections across Mexico and the United States, as well as in Argentina, Canada, Colombia, Cuba, France, Iraq, Israel, Italy, and Puerto Rico. His work has been published widely, and in 2012 he received awards from the Instituto Nacional de Bellas Artes and the National Legion of Honor, both in Mexico.