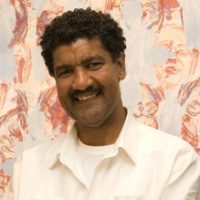 Pepón Osorio, best known for large-scale installations, was born in Santurce, Puerto Rico. He was educated at the Universidad Inter-Americana in Puerto Rico and Herbert H. Lehman College in New York, and received an MA from Columbia University in 1985. Osorio’s pieces, influenced by his experience as a social worker in The Bronx, usually evolve from an interaction with the neighborhoods and people among which he is working. “My principal commitment as an artist is to return art to the community,” he says. A recent example is “Tina’s House,” a project created in collaboration with a family recovering from a devastating fire. The house—a tabletop-size art piece—tells the story of the night of the fire and those affected, and is traveling the country in a series of “home visits.” A home visit invites a new family to live with the art work for a period of at least one week, allowing the story of “Tina’s House” to be told in many homes and environments. His work has been shown at the Whitney Museum of American Art and El Museo del Barrio in New York, the Smithsonian Museum of American Art in Washington, D.C., and el Museo de Arte de Puerto Rico and El Museo de Arte Contemporáneo de Puerto Rico. Pepón Osorio lives in Philadelphia.