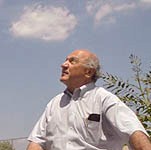 “As I began working in sculpture in the late 1950s,
1960s, and 1970s, sculptors were being drawn towards
the movements of abstract expressionism and
monumental minimalism. This influence was manifested
early in several of my site commissions, bronze
and steel sculptures.
The development of my recent work lies in the recalling
of the memories of early years of my life. I
remember growing up in Europe and Africa during
the Second World War and recall images of broken
and twisted metal of war machines; images of broken
marble archaic Greek sculptures; Ionic columns
standing alone for millenniums; Cycladic plank idols;
objects carved in ivory and ebony from the Congo;
and the massive geometric forms of Egypt. There
were also those monumental stone markers scattered
throughout the Middle East and Europe embedded in
the earth, frozen in time and still heralding the laws
of despots and monarchs of ancient times. These images
have found their way into my new works in the
‘stele’ series, the fragmented figures of archaic marbles,
and mythological subjects captured in bronze
sculptures and paintings.
Like most artists, my work develops with new experiences.
This coming together of the early and current
ideas influences the always evolving creation of new
sculptures, paintings, drawings and prints.”
Peter Calaboyias was born in Icaria, Greece. He holds
a Bachelor of Science degree from Pennsylvania State
University, University Park, and a Master of Education
degree from Indiana University of Pennsylvania. He
has completed additional studies at Carnegie-Mellon
University, Pittsburg, and University of Pittsburg,
both in Pennsylvania. The recipient of many commissions,
he has participated in numerous exhibitions
throughout the United States and Greece, and is the
Founder and President of the Pittsburg Society of
Artists as well as the President of the Pittsburg Society
of Sculptors. His work is also included in several
corporate and private collections.