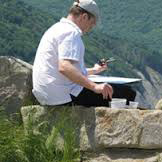 Born in New York City in 1955, I have lived here most of my life. In the years 1972-76 I attended the Brooklyn Museum Art School and from 1987 until 1990 I attended and graduated from Pratt Institute. My principle teachers were Francis Cunningham and Lennart Anderson. During the years 1983 through 1986 I lived, worked and exhibited for six-month intervals, in Venice, Milan and Casole d’Elsa in Italy. In recent years the focus has been on the city that is my home. As I stated in a recent interview for American Arts Quarterly, places are meaningful—they feed me as a painter. Certain locations generate a specific power or energy. New York City generates this in an alive and changing manner. I have been awarded grants through the Adolph and Esther Gottlieb Foundation and the Pollock Krasner Foundation. A review was published on me last Fall in the American Arts Quarterly.