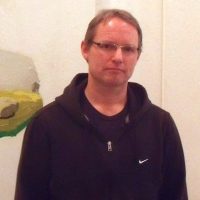 Peter Opheim was born in Landstuhl, Germany. He claims that “any Old World influence would be a stretch,” due to the fact that his family, employed by the U.S. Air Force, relocated to Minnesota a month after he was born. Growing up in the Midwest, he received his Bachelor of Arts degree in 1983 at Saint Olaf College in Northfield, Minnesota, earlier in 1981 Opheim attended Cheingmai University in Cheingmai, Thailand. Eventually he settled in the United States in New Mexico north of Taos, where he lives today with his wife and two children.

For the artist, the act of painting is an alchemic process, a transformation of materials into works of art. “Anything can become a painting. Whatever that thing is, the result should be unique. It should be inherent in the process that if I desired to make another piece like it, I could not.” His work is heavily layered and thick with paint. Amidst the tension of colors and non-objective marks, a graceful serenity holds in the balance. Working with palette knifes, brushes, 20 colors of paint, Opheim works the surface of his paintings layer by layer, building up and scraping away. The final surface not only shimmers with vibrant hues but projects a multidimensional vision.

Opheim has been featured in over 50 group and individual exhibitions since 1994, and has been the subject of a number of print articles. In 1995 he became the recipient of the Pollock/Krasner Foundation Grant and in 1996 received the Artist’s Award from the Friends of Contemporary Art of the Museum of New Mexico, Santa Fe, New Mexico.

Images courtesy of he artist and Steven Zevitas Gallery 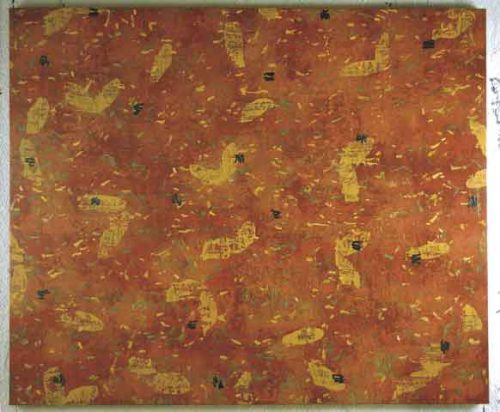