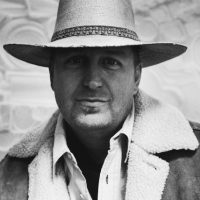 Peter Sarkisian is an American video and multimedia artist who lives and works in Santa Fe, New Mexico.

Sarkisian has exhibited in numerous museums throughout the world, including the San Francisco Museum of Modern Art, the Picasso Museum in Antibes, France and the Whitney Museum of American Art.

Peter Sarkisian’s art lies at the intersection of film, video and sculpture. He began his career as a filmmaker in the late 1980s, studying direction at the California Institute of the Arts and the American Film Institute before working in the film industry in Los Angeles. By 1994 Sarkisian’s interests had grown to include video sculpture, and in 1996 he began working with video projection, producing a number of spatial installations in order to challenge the moving image, as well as its standardized format.

Sarkisian is known for producing multi-media installations that blur the line between what is tangible and what is imagined. His video installations are designed to create perceptual conflicts between image, contour and surface, thereby allowing the viewer to draw multiple visual conclusions while reconsidering the medium of video itself. The relationship between viewer and viewed, and ultimately the dynamic between the two, is the focal point of Sarkisian’s art.