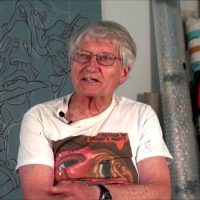 Peter Saul is an American artist and one of the forefathers of Pop Art. Known for his aggressive and colorful cartoonish paintings satirizing American culture, he has “spent a lifetime avoiding easy critical definition,” according to the writer Holland Cotter, who also called him “a classic artist’s artist.” One of his most famous series, Vietnam (1966), embodies the chaos and deformities that typify Saul’s distinctive figurative scenes, offering the viewer a sense of the profound disdain he felt for the war in Southeast Asia. He was born in San Francisco and studied at the California School of Fine Arts before receiving a BFA from Washington University in St. Louis in 1956. For much of his 20s, he lived in Europe where he met the Surrealist painter Roberto Matta, and the American art dealer Allan Frumkin, who went on to represent him for three decades. In 2008, a retrospective of his work was held at the Orange County Museum of Art in Newport Beach, then traveling to the Pennsylvania Academy of Fine Arts in Philadelphia and finally the Contemporary Art Center in New Orleans. In 2010, he was elected to the American Academy of Art and Letters. He lives and works in New York, NY and Germantown, NY.