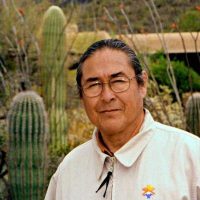 Phillip M. Haozous was born in December of 1941 in Lawton, Oklahoma. Almost a decade later, he and his family moved to Brigham City, Utah. Haozous excelled in high school track and field competitions, which resulted in his winning a scholarship to Utah State University. His first undertakings in fine art were born out of a need for authentic American Indian jewelry during his three-year partnership in the Western Theatre, Inc., in Cripple Creek, Colorado, where he created belts and other ornaments for his costumes. In 1973, he enrolled in the Institute of American Indian Arts in Santa Fe, New Mexico. While there, He was named most outstanding jewelry student of his class, which encouraged him to further refine his talent as a silversmith. His artistic talents also led him to flute-making and eventually to sculpting. He has received numerous awards, including several first place ribbons at the Santa Fe Indian Market, the Eight Northern Indian Pueblo Artists and Craftsmen Show, and the Otero Award for Creative Excellence.

“My sense of design has evolved through the years as I have tried to maintain a certain degree of realism while I explore abstract forms in my sculpture. I have found the synthesis of realism and abstraction to be extremely challenging, yet this process allows me to evolve and refine a work’s aesthetics until the form is complete. In the bronze Abstract Girl with Feet, it was my desire to develop a very simplified female form. This resulted in an abstracted figure of a young girl enhanced by the playful presentation of her protruding feet.”