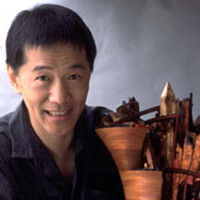 Po Shun Leong was born in Northampton, England and is an artist, former architect, sculptor and furniture maker. He was educated in the United Kingdom, first at the Quaker Leighton Park School in Berkshire, and then at the Architectural Association School of Architecture, in London, and has resided in Southern California since 1981. He is also known since the late 1980s for his highly intricate and inspiring one-of-a-kind wood boxes that have been enthusiastically acquired and are in museum collections. The “Landscape” box, a constantly evolving series since 1983 – more drama than box – is architectural in character and built up of many different woods in their natural colors. They are inspired from ancient or legendary civilizations. The flamboyant sense of shape, surprise and presentation combined with his initial struggles in Mexico has created a following for his art worldwide.

Po Shun was one of the dominant American woodcraft artists making boxes during the 1990s, selling well in the galleries and to collectors. The unique look and playfulness of the artwork has helped keep that style relevant and inspirational. He maintains a studio in the garden of his residence in the City of Winnetka in the San Fernando Valley, north west of Los Angeles. Currently he is continuing to make elaborate wood objects and is developing a line of very simple, sculpturally-inspired furniture.