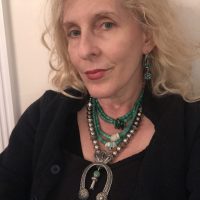 My life as an artist began at an early age. I was writing songs at 6 years old and singing professionally by age thirteen. I played a set at McCabes Guitar Shop when I was 14 years old. In the late 1970’s and 1980’s I was playing the Troubadour once a month with my band and submitting songs to other artists. The Runaways recorded one of my songs called “I Wanna Run With The Bad Boys” and you can find it on Itunes. After my time in Los Angeles, I met my now ex-husband and settled down in Laguna Beach to raise our two boys, Nolan and Kellen. After twenty years of marriage we divorced but not before I had an epiphany and started painting.
My focus on painting has been committed. I have met wonderful supportive artists who have given me some technical knowledge about composition and laying down the paint. Dan Pinkham told me “Rachel, you paint like a man”. I consider this to be the best compliment as I feel fearless when I paint. My mentor was Saim Caglayan. I have taken workshops with Ken Auster, Mark Kerckhoff, Eric Merrell, Ray Roberts and Cynthia Britain.
Living in Laguna Beach gave me the opportunity to paint en plein air many beautiful canyon scenes and seascapes. My routine for eight years was to drop my children at Anneliese’s bohemian K-8 school and head across the street to the Laguna Canyon Wilderness Park at the El Toro staging area. This was before public access and I was one of the lucky painters with the combination to the lock on the gate. I would hike with my gear and paint Laguna Canyon and sometimes one of the rangers would drive us to a remote location and pick us up later in the day. I grew as an artist and developed quickly as a painter.
In 2015 I moved to Roanoke, VA. The historical Old Southwest district is my new home. I love Victorian houses and I have restored my 1880’s home to its former grandeur. I still travel to Laguna Beach during the summer and exhibit at the Sawdust Art Festival. This is a nine week long art show that I have been a part of since 2001. I get to visit with my sons and daughter in law and paint on location at all my favorite haunts.
Besides painting landscapes I paint still life arrangements usually based on the seasons. Persimmons in the Fall, Lilacs in the early spring and Zinnia’s at the end of summer. I am devoted to painting my taxidermy peacock and a collection of specific pieces that I have formed an attachment to. Flow Blue waste bowls, the Delft bunny cup, the Geisha vase and enamel Chinese opium jars are all subjects that are rearranged and used again to design the next painting. 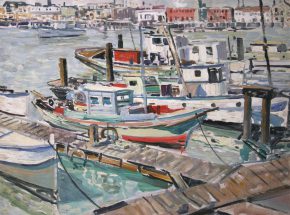