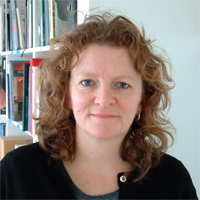 Rachel Whiteread is recognized internationally as one of the leading artists of her generation and the first woman to win the prestigious Turner Prize in 1993. In 1997, she represented the UK at the Venice Biennale. In Vienna, she is best known for her Holocaust Memorial on the Judenplatz. With this monument, the British artist has had a lasting effect on the city and changed the discourse about the past. Despite their minimalist language and severity, her sculptures have a poetic quality and evoke personal and universal human experiences and memories. Whiteread’s monumental, site-specific work for the new US Embassy in London, U.S. Embassy (Flat pack house,) (2013–15), with an interior and exterior iteration, has cast the interior of an average suburban American house, the type that may have been purchased from a catalogue in the 1950s, in concrete, lifting the details and surfaces of the structure. Each section is unique and mounted on the walls of the lobby, greeting embassy visitors as they enter through the consular court.