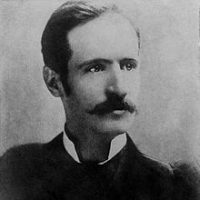 Born in New York City, Ralph Albert Blakelock gave up his institutional pursuit of medicine in 1866, and turned to art. Largely self-taught, he began exhibiting at the
National Academy of Design, New York City, in the late 1860s, and made two subsequent trips to the western territories of the United States as well as Mexico and Panama. During this time, he drew constantly and began an enduring interest in Native Americans as subjects. Upon his return to New York City, he continued to exhibit sporadically at the National Academy, the Society of American Artists, and the Brooklyn Art Association. Around 1880, his style diverged from that of the Hudson River School, becoming more intimate, less naturalistic, and darker in tonality. He was diagnosed with paranoid schizophrenia in 1899, and spent most of his remainingyears institutionalized, with his family languishing in poverty. Meanwhile, his paintings were being sold for record prices and he became perhaps the best known artist in America. He was elected a full member of the
National Academy of Design in 1916, and died three years later in New York City. Autumn Landscape (also known as Autumn Oaks or Oaks in Autumn) received the
Temple Silver Medal for the best landscape at the Pennsylvania Academy of the Fine Arts, Philadelphia, in 1892. Norman Geske, compiler of the Nebraska Blakelock Inventory, has written that he “would place [Autumn Landscape] very high among the examples of this phase of the artist’s work as one of the best [he had] seen.”
Adapted from biographical entries of the Panhandle Plains Historical Museum, Canyon, Texas, and the National Gallery of Art, Washington, D.C. 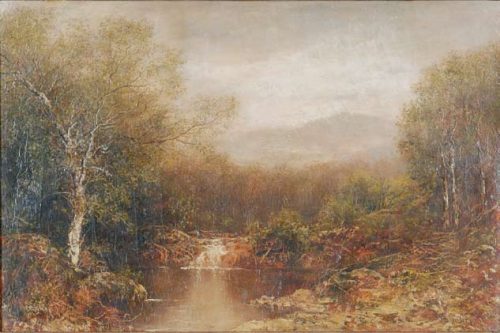