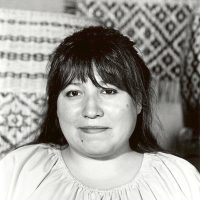 Ramona Lossie demonstrates double-weave rivercane, white oak, and basketmaking. Her knowledge of the rivercane basketweaving tradition became crucial several years ago when she and her sister Lucille became the only living practitioners of that art among the Eastern Band.

She grew up in the Painttown community in Cherokee and learned basketweaving from watching her mother and grandmother. After graduating from high school, she continued her education at Western Carolina University and the University of Tennessee.

Ramona often travels from her home in Cherokee, North Carolina, to Knoxville, Tennessee. She has done many exhibitions and demonstrations at the University of Tennessee in Knoxville and helped organize a Native American exhibition celebration at the university. She has participated in numerous fairs and powwows by demonstrating and teaching basketweaving, and by selling her work. Her work has won blue ribbons at festivals in Chicago, Albuquerque, Wisconsin, and Cherokee North Carolina. She has been featured in an Atlanta newspaper. Her baskets are on display at the Smithsonian Institution in Washington, D.C., and in museums in Albuquerque, Chicago, Atlanta, and in Florida. In Cherokee her work is sold at Qualla Arts and Crafts Mutual, Talking Leaves, Bigmeet Pottery, and the Museum of the Cherokee Indian.