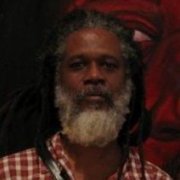 At the First Caribbean and Central American Biennial, held in Santo Domingo in 1992, 275 artists from 30 countries submitted 450 paintings. One of the very few who walked away with Gold, was 33 year old, Ras Ishi Butcher. Before 1992, he had studied art at the Barbados Community College’s Division of Fine Art and exhibited in several shows in his native Barbados, United States, and Latin America; including Gallery Caribe in Philadelphia and California, the Havana Biennial and the Art Collection Foundation, Barbados. In 1994, he and his colleague, Ras Akyem I Ramsay, attended the Second Biennial in Santo Domingo, the Fourth Havana Biennial as well as exhibiting in ‘Art Of The Diaspora: Barbados Emerges’ at 479 Gallery, Soho, NYC. Ras Ishi’s sensational one man show, ‘Isolation’, held April 1995 in Barbados, was described as: “Explorations in the possibilities of the self, that have opened up for him new possibilities of artistic expression.” In 1997, Ras Ishi completed post-graduate studies in fine art at the prestigious University of Superior Studies (ISA), Havana, Cuba. His work has been published and discussed in such publications as “Barbadian Art: What Kind of Mirror Image?” by Allison Thompson et al, “Black Art and Culture in the 20th Century”, by Prof. Richard Powell, and is represented in numerous public and private collections across the Americas, the Caribbean, and Europe. The artist’s statement is: “My art is about the anguish of my soul, searching for ease and contentment to usurp my humanity from the ravages of societal destruction and barbaric self annihilation.”