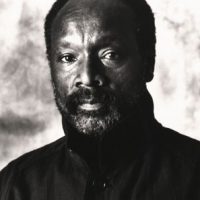 The spontaneous, expressive compositions of the San Francisco, California artist Raymond Saunders remind us of the power of the abstracted image in art. The heightened sensitivity that Saunders achieves provides an intriguing optical illusion in the modernist tradition. The fluid compositional structures he invents float across the surface of the paper and provide immediate satisfaction for the viewer by engaging the senses and elevating our intellect. The delicate floral images found in four out of the five works drift across white space accompanied by the splatters of the artist’s brush. Beautiful and ghostlike in their transparent washes of color, they embody the essence of art in its purest form. Texture is balanced with an erudite palette that solidifies these fleeting impressions with a narrative voice that grounds us in a purely visual experience and speaks to viewers of all cultures.