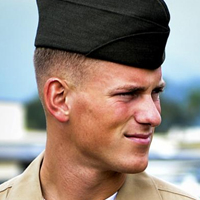 After growing up in Whatcom county with loving friends and family, Reece Lodder decided to do something to give back to his community. He joined the Marines.

Since joining the Marines, Lodder has become both a husband and father. Outside of his family life, he works as the Marketing, Advertising and Public Relations Director for the Marine Corps Recruiting Station in Seattle while also serving as a Combat Correspondent for the Marines. In addition to everything else he has going on in his life, Lodder is in the process of attaining a Bachelor of Business Administration from Western Washington University at the WWU Center at Olympic College, Poulsbo.

“Serving in this capacity has helped provide valuable context to my life as an American, a husband and father, among other roles. Both the good times and bad have shaped me to become more resilient, and extremely thankful for the freedom with which we have been blessed,” said Lodder.

After enlisting, Lodder picked up photography and he enhanced his photography techniques under the guidance of mentors within the Marine Corps. Since taking up photography, Lodder has received several awards for his work in the realm of photojournalism.