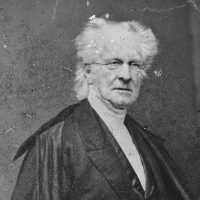 The second son of artist Charles Willson Peale, Rembrandt Peale followed his father’s interests closely. As a young teenager he had begun to paint portraits, and by seventeen had made his first portrait of George Washington. In 1801 he aided his father’s excavation of a mastodon skeleton discovered near Newburgh, New York, and the following year traveled to London, where he exhibited the skeleton and studied with Benjamin West [American-born painter who was a founder of the Royal Academy in London in 1768, and in 1792 he succeeded Sir Joshua Reynolds as its president]. Peale returned to Europe in 1808 to make portraits of important men for the gallery his father had established in Philadelphia. After Peale’s return to Philadelphia in 1810, his career was varied; he became proprietor of his father’s museum, taught art, wrote a popular drawing manual, pursued technological experiments, and continued to paint portraits and allegorical works. He also produced over seventy copies of his famous portrait of Washington, calling himself “the only painter living who ever saw Washington.” 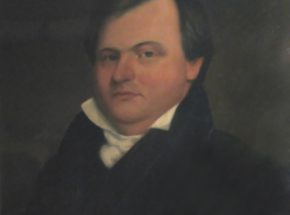