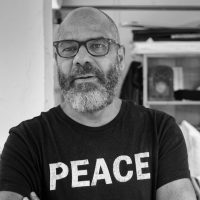 Remy Jungerman was born in Suriname and has been living in Amsterdam since 1990. He started studying art at the Academy for Higher Arts and Cultural Studies, Paramaribo (Surinam), afterwards moving to Amsterdam he studied at the Gerrit Rietveld Academy. Since his first group exhibition in the Amsterdam Stedelijk Museum, Jungerman has participated in several solo and group exhibitions worldwide.
In 2008 he received the Fritschy Culture Award from the Museum het Domein, Sittard The Netherlands.

Co-Founder and curator of Wakaman Project including 2007-2009 Intendant Cultural Diversity in the Netherlands, Mondrian Foundation.

His recent work is entangled with his Surinamese roots and relates to global citizenship in today’s society. Jungerman uses collages, sculptures and installations to show cultural critique(s) of the local and the global, the internal and the external. He places traditional materials and objects in different contexts that challenge the established notions of their representation within Western society. Jungerman derives his inspiration from Afro-religious elements of the heritage of Maroon culture in Suriname and the global black diaspora. At the same time he is also inspired by Western traditions and trends in the arts. Jungerman uses color and pattern references that both nod to the twentieth-century Dutch De Stijl movement and a manifestation of black diaspora traditions.
In his Pimba Series, Jungerman combines cotton textiles relating to Surinam Afro-religions and kaolin (clay) used in purification rituals in Surinam and the African diaspora. As a sculptor, Jungerman brings a heightened awareness to his surfaces, incising the clay to reveal the elaborate pattern of the textiles beneath.
With this series he’s adding a different narrative to the art historical canon. A narrative that shows references to the ritme of colonial plantation grid in Surinam and the esthetics of the development of abstract patterns from an African heritage.