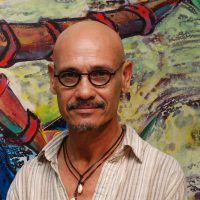 For many years René Tosari equally divided his time between the two countries of Suriname and the Netherlands, in both of which he has been very active in the arts. In 2014 however, he permanently moved to Suriname, the country of his birth.

Tosari describes himself as an experimental artist, an artist who aims to achieve something unique in each new creation and who ultimately tries to achieve a higher level of skill in every work of art he creates.The artist is especially well known for his unique style and technique. He combines oils and acrylic paints, give his paintings a unique texture and a mystical appearance. Tosari often expresses his concern for the environment in his paintings. Animals and nature play an important role and in his compositions the artist combines them with self conceived symbols and other organic shapes. Some examples are the hummingbird because of its role in cross-pollination, the ‘maripaboto’ representing the protest of traditional communities against the infringing modern world, a spade, a cow and other signs which are reminiscent of his previous politically oriented work. Typical for Tosari is also the way in which he outlines his figures with contrasting lines. His extensive research provides him with inspiration and information, which he uses with great skill and in combination with his own artistic signature to create compositions which express their own universal visual language.