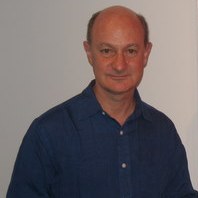 Born in Mexico City, Ricardo Mazal moved to Barcelona, Spain in 1986, and since 1990 has lived and worked in New York City and Santa Fe, New Mexico. His paintings depict the passage of time, not by illustrating events but by leaving their residue to dissipate in space like a still photograph of a speeding object blurred to abstraction. Mazal’s work has been the subject of solo exhibitions at the Museum of Anthropology and the Museum of Modern Art, Mexico City; the Scottsdale Museum of Contemporary Art, Arizona; and the Centre for Contemporary Arts, Santa Fe, New Mexico. His honors include a Creador Artistico award from the Sistema Nacional de Creadores de Arts FONCA, Mexico; and a Pollock/Krasner Foundation Grant, New York. His work is in the collections of the Museo de Arte Contemporáneo de Monterrey, Mexico; the Galería Maeght, Barcelona, Spain; Mas Art Moderno y Contemporáneo, Barcelona, Spain; and the Americas Society, New York City.