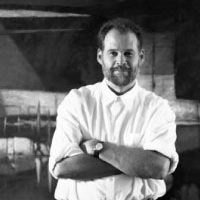 Always drawn to the aesthetic of building forms, Richard Bunkall, began sketching from a perch on the sixtieth floor of a New York high-rise and painting his interpretations. He appreciates not only the magnitude, but also the spiritual inspiration which motivates such sublime structures as Stonehenge and the Flatiron Building. Whether it be a Greek temple of the Empire State Building, in these constructions man confronts his desire to create something more permanent than himself.

In his most recent paintings a new element has emerged; steam engines, planes and ships have found refuge inside massive and ornate warehouses. Bunkall was initially inspired while touring the antiquated locomotives with his children. The spirit of invention projected in the mammoth and complex forms struck him in their parallelism to his buildings. His compositions disclose this symmetry. Bunkall caches these relics of the Industrial Age in museums of his own making. The paintings preserve and honor that which is being lost. He describes his subjects as old souls: their previous contributions examined as man advances beyond his past.

Out of the background and shadows, scurrying figures emerge dwarfed beneath their surroundings. Among them are those who move forward, habituated to the magnitude of this arena, while others pause in respect. Still, there are those who blend into or grow out of the canvas; an integral part of this cityscape. The blurred and ghostly images further the theme of the transitory in Bunkall’s work. They are the impermanent occupying the semi-permanent world of the postindustrial city.

Gargoyles and angels reside above, befitting urban guardians. Bunkall’s depiction of these icons reflects his mastering of light and shadow used in conjunction with the simplification of form. Surface further adds to the expressiveness of his pieces. The layering and re-working of paint not only create a texture similar to that of building facades, but also serve in the rendering of mass and three-dimensional form. The palette expresses the rich darkness of the Gothic element found in Bunkall’s work. He combines this with colors similar to those used by the Ash Can painters to define urban life. The gritty earth tones subtly highlight the figures and cavernous entryways.

He captures the muted light which labors to reach the floor of a dense city. These paintings reflect Nineteenth Century Romanticism. His work is an intricate synthesis of ideas displaying command of technique and style. There is a reverence in his examination of man’s creations and an awareness of the spirit contained therein. Richard Bunkall has developed an original and compelling treatment of the cityscape and of Realism. 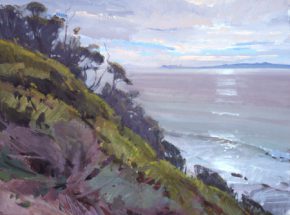