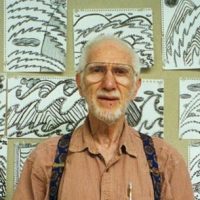 Richard Callner was born on May 18, 1927. Both sets of his grandparents immigrated to the United States from the same small village in Lithuania and settled in the Midwest during the late nineteenth century. When Callner was four years old his parents moved to Chicago, where he spent his early childhood during the Depression living in a working class neighborhood with his brother, Jerry, who became a filmmaker. Big for his age and shy as a child, Callner avoided the street gangs in his neighborhood, and preferred to stay inside and draw. Callner attributes his early visits to the Field Museum of Natural History as having a strong influence on his early monster paintings. Another favorite museum was the Art Institute of Chicago, where Callner later took drawing classes.

At age 17, Callner dropped out of school and joined the Navy during World War II. His strongest memory from this period is sitting on a ship in the middle of the ocean observing the formation of clouds, the rising and setting of the sun and moon, and most of all the changing weather, an experience that provided ideas for later landscape paintings. After leaving the Navy in 1946, his first formal study of art began in 1946-48 through the G.I. Bill at the University of Wisconsin, Madison under the direction and guidance of printmaker Warrington Colescott, who remains a close friend. Callner, who was making abstract sculpture at the time, also studied painting, printmaking, drawing, ceramics and jewelry-making.

From Wisconsin, Callner moved to Paris and he studied art at the Academic Julian, also through the G.I. Bill. Callner returned to Wisconsin for a year before moving to New York City to study at the Art Student’s League. In 1952 he was awarded a M.F.A. degree from Columbia University. A John Simon Guggenheim Fellowship enabled Callner to travel in England and France from 1959-1960 with his family including his wife Carolyn, and two young children. (Today, Carolyn, is retired from a career in Public Health in upstate New York. Son David, a writer, translator, and English teacher, lives in a rural village in Japan with his wife and has two children. Daughter Joanna is an attorney living with her family in Olympia, Washington.) Although he received a rigorous and formal art education, his life and work have been greatly influenced by his family and cadre of friends including Raymond Benson and David Castillejo along with a whole host of poets, intellectuals, musicians, and artists Ted Halkin of Chicago and Byron Browne of New York. Other opportunities included a Fulbright professorship in Yugoslavia and residencies in Finland, Hungary, Turkey, and Russia. In 1952 Callner began his long and distinguished teaching career at Purdue University in West Lafayette, Indiana where he remained until 1959. He taught at Olivet College in Olivet, Michigan from 1960-1964. In 1964-1965 Callner taught at the Tyler School of Art in Philadelphia. A year later he moved to Italy for five years and served as the founding director of the Tyler School of Art in Rome. In 1975 Callner moved to Albany, New York to head the art department for the State University of New York at Albany, a position he held until 1981. Callner played a pivotal role in the establishment of the university’s M.F.A. program in 1977. Callner continued to teach graduate level courses until he retired in 1991.

After retirement, Callner built a spacious, light-filled studio and devoted his energies to creating art full time. Callner has an impressive roster of one person and group exhibitions in this country and around the world to his credit. In fact, friends muse that Callner is better known abroad than in the United States. His works are in many prestigious private and public collections including the State Hermitage Museum, St. Petersburg, Russia; Museum of Painting and Sculpture, Istanbul; the Gallery of Modern Art, Pristina, Yugoslavia; the Albany Institute of History & Art, the Art Institute of Chicago; The Detroit Institute of Arts; the Philadelphia Museum of Art; the New York Public Library; Yale University Art Gallery; Cincinnati Art Museum; Worcester Art Museum; and the University Art Museum, State University of New York at Albany. In 2003 the Albany Institute of History and Art held a 50 year retrospective exhibition of his work as a tribute to his career as an artist and to acknowledge his influence and contribution of the cultural fabric of the region.