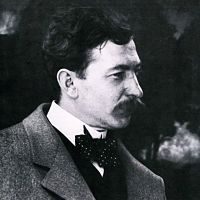 Richard E. Miller was a major American Impressionist painter and a member of the famous Giverny Colony of American Impressionists.[1] Miller was primarily a figurative painter, known for his paintings of women posing languidly in interiors or outdoor settings. He is best described as a Decorative Impressionist.[2] The term Decorative Impressionism was coined in 1911 by the art writer Christian Brinton to describe the work of Miller’s friend and Givery colleague Frederick Friseke, but it accurately describes the art of several members of the Giverny colony. Miller grew up in St. Louis, studied in Paris, and then settled in Giverny. Upon his return to America, he settled briefly in Pasadena, California and then in the art colony of Provincetown, Massachusetts, where he remained for the rest of his life. Miller was a member of the National Academy of Design in New York and an award winning painter in his era, honored in both France and Italy, and a winner of France’s Legion of Honor. Over the past several decades, he has been the subject of a retrospective exhibition and his work has been reproduced extensively in exhibition catalogs and featured in a number of books on American Impressionism. 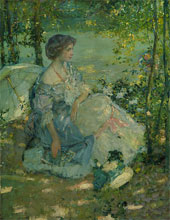