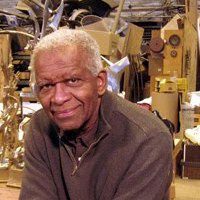 Sculptor Richard Howard Hunt was born on September 12, 1935 in Chicago and raised there. Most of his work is abstract, suggesting recognizable human and natural forms. Hunt describes his work as, “the reconciliation of the organic and the industrial.”

Hunt began in his teens, modeling in clay and carving in his bedroom at home. He later created a studio in the basement of his father’s barbershop. Intrigued by metalwork at the African collection of Chicago’s Field Museum of Natural History, where his mother, a librarian, frequently took him. Working in a zoological lab at the University of Chicago contributed to his fascination with animal and insect forms.

Hunt attended the Art Institute of Chicago from 1953 to 1957 focused on sculpture especially welding, and he studied lithography. Hunt was exposed to the work of the Sculptors Julio Gonzales and David Smith, to whom he has attributed inspiration to use direct-metal techniques to transform steel, aluminum, copper, and bronze into sculpture. The welding torch being his mallet and chisel, and his materials, which included found objects, garbage and auto parts found on industrial sites that he transformed into plant-like and insect-like forms. By 1960, Hunt had become a major open-form, direct-metal sculptor.

After college, he traveled abroad to Europe in 1957 on a fellowship. Examining Etruscan and Renaissance sculpture reinforced his feeling that metal was the medium of the Twentieth Century. Hunt won his first award in 1959 at an annual show for artists in the Chicago area. One of the jurors was highly impressed with Arachne, the work he had submitted, and urged New York’s Museum of Modern Art to purchase it.

In the late 1960s, Hunt began to combine closed with open forms, calling them “hybrid figures.” In them, the influence of Futurist sculpture can be felt. In the 1970s, he added inventive Baroque flourishes to his forms so that solids seemed both to penetrate voids and to be penetrated by them.

Hunt was gradually moved away from his early calligraphic work to closed contours and solid shapes. As commissions have been bestowed upon him, the scale of his sculpture has grown. He has produced more than fifty-five public-site sculptures, including a candelabra for St. Matthew’s Methodist Church, Chicago (1970) as one of the thirty-five that exist in his home state of Illinois alone. Although his success as a large-scale public art sculptor has taken him out of the exhibition circuit, Hunt has become interested in color lithographs, which have a graphic interest distinct from his three-dimensional work.

In 1971 Richard Hunt became the first black American accorded a retrospective at the Museum of Modern Art. Throughout the years he has received Guggenheim, Ford, and Tamarind Fellowships, awards from the Art Institute of Chicago, and Logan, Palmer, and Compana prizes. Hunt holds eight honorary degrees, and his work is represented in major museums and collections. His background includes professorships and residencies in art, and his work includes drawings and lithographs as well as sculpture. He has served on the National Council of the Arts and as a commissioner of the Smithsonian Institution’s National Museum of American Art.

Sources include:
Matthew Baigell, Dictionary of American Artists
Peter Falk, Who Was Who in American Art
Ro Gallery, www.rogallery.com