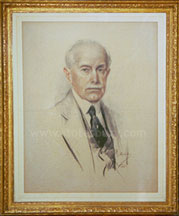 Richard Partington was known as a prolific portrait painter in California during the turn of the century. He was born in Stockport, England, into a family of artists, and his father gave Richard and his sister Gertrude lessons in drawing, poetry, music and painting. In 1889 the Partington family moved to Oakland, California. Richard Partington and his father founded the Partington Art School across the hall from William Keiths studio on Pine Street in San Francisco. Partingtons father taught at the school and Richard worked for a time as a quick-sketch artist for the San Francisco “Examiner” newspaper. He exhibited two of his paintings at the Mid-Winter Fair in San Francisco in 1894. Richard moved back to Oakland after the 1906 earthquake and fire destroyed the school. He became the curator for the Piedmont Art Gallery and continued to paint portraits locally. He traveled to Philadelphia, Pennsylvania in 1916 for a portrait commission and ten years later died there. He was an active member of the San Francisco Art Association and the Bohemian Club of San Francisco.