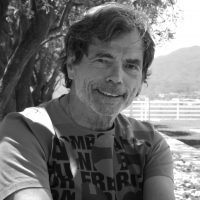 Richard Tuttle is one of the most significant artists working today. Since the mid-1960s, he has created an extraordinarily varied body of work that eludes historical or stylistic categorization. Tuttle’s work exists in the space between painting, sculpture, poetry, assemblage, and drawing. He draws beauty out of humble materials, reflecting the fragility of the world in his poetic works. Without a specific reference point, his investigations of line, volume, color, texture, shape, and form are imbued with a sense of spirituality and informed by a deep intellectual curiosity. Language, spatial relationship, and scale are also central concerns for the artist, who maintains an acute awareness for the viewer’s aesthetic experience.

Tuttle has been the subject of hundreds of solo exhibitions since 1965, including numerous museum surveys, ranging from his first, at the Whitney Museum of American Art in 1975, to more recently, a two-year travelling retrospective organized by the San Francisco Museum of Modern Art (2005-2007). Tuttle has also been included in the prestigious group exhibitions, the Venice biennale (1976, 1997, 2001) and the Whitney Museum of American Art Biennial (1977, 1987, 2000). His work is held nearly every major collection worldwide, including in Europe at the Stedelijk Museum, Amsterdam; the Centre Pompidou, Paris; and Kunstmuseum Winterthur, Switzerland; the Hirshhorn Museum and Sculpture Garden, Smithsonian Institution, and the National Gallery of Art in Washington, D.C., and The Metropolitan Museum of Art and The Museum of Modern Art in New York, among many others.

In 2012, Tuttle was elected to the National Academy. He was the Artist in Residence at the Getty Research Institute from September 2012–June 2013. The artist lives and works in Mount Desert, Maine; Abiquiu, New Mexico and New York City.