Rick Chapman’s bold visual sensibility makes it easy to see the threads connecting his Human portraiture and his Circle, Tree and Isolate series. A careful sense of design, intimacy, and texture emanate from all of Chapman’s images.

His portraits strive to explore that which ties us all together as humans, the essence of what is common to all of us. There is no formula for this. From Chapman’s perspective, the most successful portraits are the result of an intense two-way dialogue where something vital and universal is expressed and recorded. His best images reveal the energy of this rich mutual exchange.

What is it that we see in his celebrity portraits that we may also see in his portrait of a drifter or a portrait of his own brother? Composure, self-reflection and connection, no matter how brief, are all present. Humanity’s common ground is at the heart of Rick Chapman’s portraiture.

Chapman’s obsession with searching rivers and creeks for spherical rocks fuels his interest in the universal truths symbolically held within their perfect shape. Researching circle themes found in religious iconography, architectural theory and nature’s systems inspired the creation of his series, Circle, over 11 years ago. Chapman studies what is remarkable about the mundane circles and spheres he encounters in everyday life. Whether the objects are found in urban centers or rural landscapes, he explores the universal truths they represent. Sizing every printed circle to the same diameter, they become virtual letters of a lost alphabet, together communicating a language that transcends the original objects themselves.

Rick Chapman’s work is held in many collections throughout the United States including the Smithsonian National Portrait Gallery, the LA County Museum, the Museum of Fine Arts Houston, the Fine Arts Museums of San Francisco, George Eastman House, and the private collection of Sir Elton John.

Chapman is represented by ClampArt Gallery in New York, Dolby Chadwick in San Francisco and Paul Kopeikin in Los Angeles.

Commercial, editorial and commissioned portraiture can be booked directly thru his studio. Commercial clients include ESPN, Chevrolet, the National Football League, and ABC. 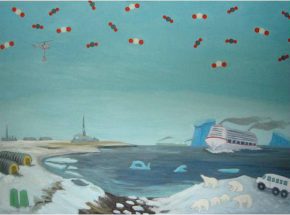