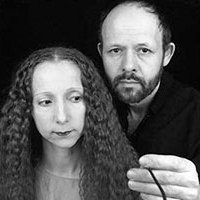 Rimma Gerlovina and Valeriy Gerlovin were among the leading figures in the underground conceptual art movement in Russia during the 1970s. After moving to New York in 1980, they colorfully described this experience in their book, “Russian Samizdat Art.” In New York they continued to make sculptural objects, and their photographic projects grew into an extended series called Photoglyphs. In their photographs, they use their own faces to explore the nature of thought and what lies beyond it.

The Gerlovins liken their work to myth making, in that they pursue fundamental verities in life, using the sublime form of metaphorical art. The works connect not only to their metaphysical ideas, but also to their life in general: “to the whole sequence of its perhappiness.” Their photographs are of their own bodies and faces, but do not act as portraits. Not the models but modules are used for personification of different stages of psychological experience. The artists identify their metaphorical games as theater of consciousness.

Rimma Gerlovina’s hair is featured prominently in the art of the Gerlovins as a constructing element of the body. Used for the linear drawings her braids transmit transpersonal waves reminiscent of an aura of live filaments. Long loose hairs function as threads of life; streaming in abundance, they allude to Aphrodisiac vitality and Samsonian strength. On the other hand, they are the haircloth worn during mourning and penitence.

They have been featured in many exhibitions at American museums, including the Art Institute of Chicago, and the extensive retrospective of their photography, organized by the New Orleans Museum of Art (curated by Halsey Gallery Director Mark Sloan), was exhibited in fifteen cities.

Their work has been featured in numerous publications, including “Reflections in a Glass Eye, Works from the International Center of Photography Collection,” “The Promise of Photography: the DG Bank Collection,” “Understanding Art “ (an art history book for American colleges.) Their photographs have also been featured in numerous periodicals, including the cover of the New York Times Magazine, and books, such as “Art on the Edge and Over.”