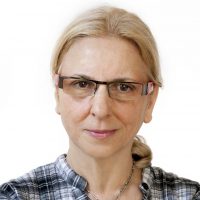 “My diverse narratives include the intimate backstage transformations during Broadway plays, the visual poem of The Brooklyn Bridge covered in fog, the eccentric daily existence of Catskill Village, the mysterious lives of mannequins reflected in store windows, and the performance of Oedipus by inmates incarcerated for life at Sing Sing Correctional Facility.

My heart and my eyes are interchangeable. I refuse to be boxed in by subject matter when I am surrounded by such a variety of sites and internal ideas. I must respond to what speaks to me at any given moment in my life.”

Katvan’s work is regularly exhibited at Gallery 138, and has also been shown at the International Center of Photography, the Museum of the City of New York, and the Museum of Television and Radio. She has been featured in numerous publications and online blogs including Harper’s Bazaar and The New York Times as well as www.kodak.com and www.lanciatrendvisions.com.