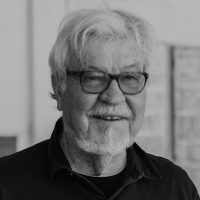 Roland Albert, a widely respected artist in his native Germany, is a fixture on the art scene of the state of Rhineland-Palatinate. He is part of the artists’ exchange between Columbia and its German sister city of Kaiserslautern. In that context, he has participated in several group exhibitions in Columbia in the past few years, including the 2001 Art Garage Project. His 2004 exhibition Sticky Stuff at Columbia’s Lewis + Clark Gallery was his first solo show in the United States. Albert has exhibited all over Europe and studied with the famous Greek-American sculptor Kosta Alex in Paris in 1964. In 1970, he graduated from the prestigious Munich Academy of Fine Arts.