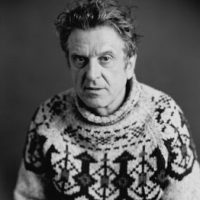 Robert De Niro, Sr. blended abstraction and representation, bridging the gap between European modernism and Abstract Expressionism. Characterized by his use of line, gesture, and movement, De Niro’s art is grounded in the act of painting and drawing rather than subject matter, while also often referencing European masters from Delacroix to Matisse. With his expansive knowledge of art history, he sought to maintain the tradition of representational painting, eschewing the tide of abstraction that was championed by many of his contemporaries. He was by no means a traditionalist, however, and instead he followed his own uncompromising vision of emphatic painterliness and experimentation.

After studying with Hans Hofmann in New York and Provincetown and Josef Albers at Black Mountain College, North Carolina in the late 1930s and early 1940s, De Niro worked for five years at Hilla Rebay’s legendary Museum of Non-Objective Art. In 1945, he was included in a group show at Peggy Guggenheim’s Art of This Century in New York, which was a leading gallery for the art of both established European modernists and members of the emerging Abstract Expressionist group like Jackson Pollock, Mark Rothko, Robert Motherwell, and Clyfford Still. De Niro had his first solo exhibition there in April and May of the following year. At that point, he was primarily working in an abstract manner, often with figural references. Sadly, much of his work from this period was lost in a studio fire in 1949.
Beginning in 1950, De Niro had a series of exhibitions at the Charles Egan Gallery in New York, which also showed the work of Willem de Kooning, Franz Kline, Philip Guston, and others. He participated in many important exhibitions such as the Whitney Museum Annuals, Stable Gallery Annuals, and the Jewish Museum’s celebrated 1957 show, Artists of the New York School: Second Generation.
By this time, De Niro had arrived at his distinctive mode of painting, which he continued to explore and develop for the next forty years. His works from these decades are expressionistic, radical stylizations that feature his signature post-Fauve palette with freely brushed areas of color defined by strong outlines. Through bold, reductive arrangements of shapes and colors, he described his still lifes, landscapes, and nudes in broad slashing strokes, creating rich visual experiences that resonate in his vital and innovative art.
Robert De Niro, Sr. is represented in many museum collections, including those of the Metropolitan Museum of Art, Brooklyn Museum, Smithsonian American Art Museum, Hirshhorn Museum and Sculpture Garden, Corcoran Gallery of Art, and Whitney Museum of American Art. In 2009, a retrospective of his work was presented at the Musée Matisse in Nice, France.
www.dcmooregallery.com