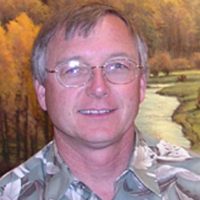 Robert Harper was born in 1957 in Columbus, Montana. As a young boy, his time was divided between his home in Wyoming and his grandparent’s ranch in rural Montana. The rich and rugged landscapes of these two states provided Robert with a deep appreciation of nature and the beauty it affords. But it wasn’t until his teen years, when Robert saw a painting by the legendary Conrad Schwering, that he considered painting the landscapes that he was so familiar with. Schwering’s work birthed a desire in Robert to capture the beauty around him. Encouraged by a local art instructor and friend, Robert spent every spare moment of his high school and college years with a paintbrush in hand.

Robert began his formal training at the University of Montana. Wanting more than the classroom could offer, Robert moved his studies outdoors. He set up his easel in hundreds of plein air locations in an effort to understand light, form and movement. Robert refers to these hands-on lessons as his “school of nature”, and he loves the freshness and inspiration they bring to his work. Robert’s field studies have taken him throughout the western states, to Hawaii, Canada, Europe and Southeast Asia.

Since beginning his career, Robert has had numerous one-man exhibitions in Montana, Wyoming and Colorado. He was a much sought- after instructor for painting workshops in a nine-state area for many years. Awards and honors Robert has received include several Best of Show and People’s Choice Awards. Publications include numerous newspaper articles as well as articles in Southwest Art (May 1996 and October 2001) and the cover of the Jackson Hole phone book (1994). Robert’s work hangs in galleries in Aspen, Steamboat Springs, Jackson Hole and Scottsdale, as well as in private collections throughout the world. Recently, one of Robert’s pieces from Amy Grant’s and Vince Gill’s personal collection was featured as the backdrop for the set of Amy Grant’s “Time Again” concert and DVD. The video was honored in April of 2007 with the Dove Award for Long Form Music Video of the Year. Robert and his wife, Crystal, live in the colorful western slope of Colorado where they have raised their two daughters, Tawnya and Crysty. Robert boasts that these three women are his biggest fans and best critics. He still spends time painting outdoors, often taking his family with him to explore nature’s beauty. After all these years, Robert’s greatest work still reflects what he knows best: the rugged mountains of Wyoming and the pasturelands of Montana – the quiet places of his boyhood home. 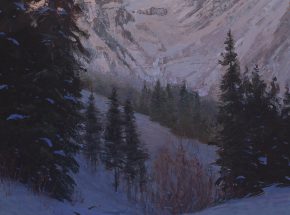