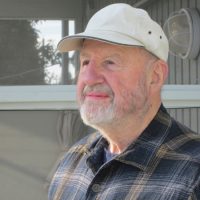 “We live in a world dominated by physical science and technological advancements. Our society has moved toward an electronically enhanced life-style, which embraces a form of pragmatic realism. Through our cognitive investigations, scientists and technologists have become the image-makers of our culture. These images of the universe shape our thinking and action. They threaten to overshadow the broader humanistic character of our American/European society.

I find myself, as a contemporary artist, asking many questions about this dynamic and startling culture. These questions, insights and views are translated into my visual art expression.

In recent years, I have continued to make a series of paintings, sculptures and original prints of space age landscapes and artifacts: mind’s-eye images of scenes from distant planets. These efforts are produced for the ‘fun of it.’ Many of them are scenes from the Pacific Northwest. They record our visual environment as one might jot down observations in a journal.” Robert Howard Hunter

Born and raised at the foot of Mt. Rainer in Enumclaw, Washington, Robert Howard Hunter earned his Bachelor of Science degree from Oregon State University and his Master of Fine Art degree from the University of Oregon. He also studied at Wofford College, Spartanburg, South Carolina. The recipient of several grants and awards, Hunter has participated in 65 solo exhibitions and more than 155 juried and invitational exhibitions since 1961. His work can be found in numerous private, public and corporate collections.

After retiring from a 36-year teaching career at the College of Architecture, Clemson University, South Carolina, the Hunters moved to Skagway, Alaska, where they owned and operated an art gallery dedicated to Robert Howard Hunter’s work. In 2003, the Hunters moved to Whidbey Island in Puget Sound, Washington. Recently, they returned the Hunter Art Studio to Skagway. Since 1996, Hunter has specialized in producing watercolors and drawings of historic building and sites in the Pacific Northwest, Western Canada and Alaska. He is also in the process of painting watercolors and graphite drawings of major lighthouses between San Diego, California, and the Aleutian Islands, Alaska, in addition to visually recording historic buildings from Western Washington State. 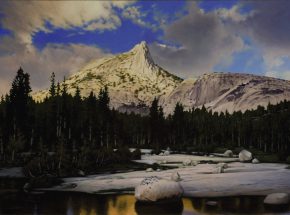