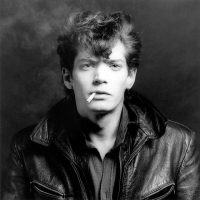 Photographer Robert Mapplethorpe was born into suburban America in Long Island. He received a B.F.A from Pratt Institute in Brooklyn, working in various media. At this time he had not yet worked in photography, but incorporated many photographic images from magazines and books. Mapplethorpe admired the work of Andy Warhol, who later became a close friend, and soon began taking his own photographs with a Polaroid camera.

His first series of Polaroids were self-portraits and of the singer-artist-poet, Patti Smith. In the mid-seventies, he acquired a large format press camera and began taking photographs of a wide circle of friends and acquaintances. These included artists, composers, socialites, pornographic film stars and members of the S & M underground.

When his close friend, Andy Warhol, for whom he often took photos for Interview Magazine, suddenly died, Mapplethorpe started preparing for his own death by establishing an AIDS research foundation in May 1987. He established the Robert Mapplethorpe Foundation to promote photography, support museums that exhibit photographic art, and to fund medical research and finance projects in the fight against AIDS and HIV-related infection.