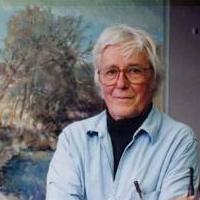 Robert Sudlow was born in Holton, Kansas, where he spent his childhood, and developed his love and fascination for the prairies and the essence of life that surrounded him. In 1942, he received a bachelor of fine arts degree from The University of Kansas, where he studied under Albert Bloch, who became a mentor for Robert Sudlow. That same year he enlisted in the U.S. Navy, trained as a pilot, flying sea planes. He earned the rank of Lieutenant Senior Grade and awarded the Distinguished Flying Cross for service in the Western Pacific Theater, World War II. “While learning to fly in the Navy, I managed to paint a lot of watercolors- swamps, beaches, airfields and romantic fantasies.” After his war service, he spent a year in art academies in Paris. Later, he attended California College of Arts and Crafts where, in 1956, he received a Master of Fine Arts degree. He studied under the supervision and teachings of a prominent California painter, Richard Diebenkorn.

In 1962, Sudlow was appointed associate professor of drawing and painting. He took a sabbatical in Greece, Belgium, Germany, Spain, England, and Ireland. In 1971, he was granted full professorship at the College of Fine Arts at the University of Kansas where, he continued to teach painting, and retired in 1987. In 1974, Sudlow was the first artist to be named Kansas Governor’s Artist. He was also named Kansan of the year in 1997 by the Native Sons and Daughters of Kansas. His paintings are included in countless exhibitions as well as numerous public and private collections across the nation and abroad. His works are part of the permanent collections at the Nelson-Atkins Museum of Art, Kansas City, Missouri; Brooklyn Museum, Brooklyn, New York; The Joslyn Museum of Art, Omaha, Nebraska; Saint Louis Art Museum; Mulvane Museum of Topeka, Kansas; Wichita Art Museum; Marianna Kistler Beach Museum of Art at Kansas State University;
Spencer Museum of Art, University of Kansas, Lawrence, Kansas; Baker University, Albrecht-Kemper Museum of Art, St. Joseph, Missouri, and countless others.