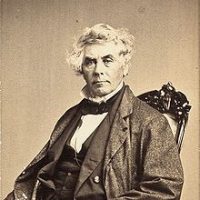 An early member of the Hudson River school, Robert Walter Weir was incredibly versatile, excelling not only as a landscapist, but also as a portraitist and genre painter. In addition to his fruitful career, Weir was a highly respected art instructor who taught for over forty years. Weir himself was largely self-taught, training briefly with John Welsey Jarvis and Robert Cox in New York, and later with Pietro Benvenuti in Florence from 1824–27.

Weir held a longtime position at the U.S. Military Academy at West Point, where he was hired first as a drawing instructor and later appointed a professor in 1846. His students included future celebrated American painter James Abbott McNeill Whistler and Civil War generals Ulysses S. Grant and Robert E. Lee. In 1876, Weir ended his lengthy teaching career, relocating to New York City where he kept a studio. The artist exhibited widely during his lifetime at venues including the National Academy of Design (1827–51; 1864–81) and West Point Museum, where a retrospective of his work was hosted in 1976. Arguably Weir’s most famous work, The Embarkation of the Pilgrims, hangs in the Rotunda of the Capitol building in Washington, D.C.. Weir created many works depicting the Hudson River, documenting its expansive views from varied perspectives. The artist’s genre painting, Greenwich Boat Club, set an all-time record for his work, bringing $1,202,500 at Sotheby’s in December, 2008 (more than double its high estimate). In addition to his personal success, Weir was father to Julian Alden Weir and John Ferguson Weir. Weir’s sons continued their father’s artistic achievements, becoming well-known American artists in their own right.