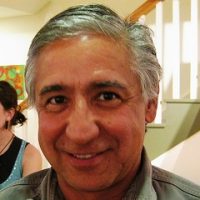 Roberto Juarez studied at the San Francisco Art Institute and UCLA, and teaches at the School of Visual Arts/NYC. Past highlights of his career include public murals commissioned for the Grand Central Terminal in NYC and for Whitman College’s Paul G. Allen Reading Room. He won the Prix de Rome in 1997, and was a Guggenheim Fellow in 2001-2002. He has shown consistently in New York City since the early 1980’s. His most recent solo exhibition was at the Charles Cowles Gallery, NYC, in May 2008.