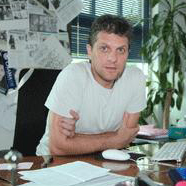 Mapping Dubai attempts to rationalize in visual manner the human experience as defined by the ever-changing physical landscape that makes up contemporary urban Dubai. The project started at 12am on March 5, 2011 in Media City and ended at 12am on March 6, 2011 at Dubai Creek at the site of the new US Consulate. The artist took one photograph every minute during this 24-hour interval. The resulting 1,440 photographs are presented in sequential order, 24 rows, one per hour, and 60 columns, one per minute. Throughout the photographic experience, the artist equally engages the inane and the sublime, treading gently along the act of public statement and private reverie.

Mapping Dubai was commissioned by Art in Embassies and the US Consulate General to mark the 40-year relationship the UAE has shared with the United States. The artist’s final destination was new Consulate compound site in Bur Dubai.

Roberto Lopardo is a first generation Italian American born in Brooklyn, New York. In 1996 he was awarded a Bachelor of Arts degree in Political Science with a minor in Philosophy from Whitman College in Walla Walla, Washington. He received a teaching certificate from Brown University in 1999. In 2000, he was awarded a Masters degree of Fine Art from the Rhode Island School of Design.

Roberto is a Professor of Photography and the former Chair of Visual Communication at American University in Dubai where he teaches a myriad of photographic classes that cover black and white and color, chemical and digital techniques and processes, with an emphasis in documentary and art photography. He has also taught photography at the University of Arizona, Rhode Island School of Design, Arizona School for the Deaf and Blind, and Dine College on the Navajo Reservation.