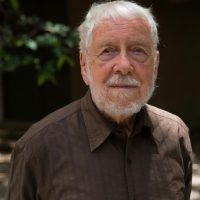 Roger von Gunten is a painter and graphic artist known for his lively use of color and figures that create a space for imagination. His compositions include paintings, drawings, engravings, sculpture, public art, and scenography for theater and opera. Since the 1980s, he has continued teaching generations of plastic artists.

Born in Zurich, von Gunten’s love for art started as a child when he and his father painted together. In later years, he studied art and design at the Kunstgewerbeschüle in Zurich, under the supervision of Johannes Itten, Swiss expressionist painter and theorist associated with the Bauhaus; this school of design in Weimar, Germany reimagined the material world to reflect the unity of all the arts and combined elements of both fine arts and design education. An adventurous artist, von Gunten traveled through Ibiza and New York and even drove along the Pan-American Highway, the longest road in the world, stretching from Alaska to Argentina. When he moved to Mexico in 1956, where he remains today, he joined a select group of vanguard artists known as the Breakaway Generation. Members opposed the Mexican School of Arts and its muralists, upholding freedom of artistic expression. Among von Gunten’s honors are the Bellas Artes medal, bestowed by the Mexican government, and the Artist Emeritus Medal, given by Art21Studio, Zapopan, Mexico, for more than fifty years of artistic creation. He has been featured in over 200 solo exhibitions and 300 group shows, namely at the Art Institute of Chicago; the Tbilisi Museum of Fine Arts, Georgia; and the Irish Museum of Modern Art, Dublin.