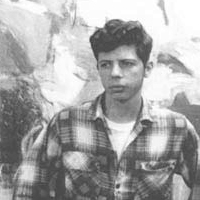 The lyrical abstractions of Ronnie Landfield have become icons of the modernist Colorfield movement. As a young boy, growing up in New York City, Landfield would visit the avant garde galleries of the time, taking in the abstract expressionists’ work such as Jackson Pollock, Ad Reinhardt and Willem de Kooning. In a reaction to the all-over, process oriented abstraction of the midcentury, Landfield painted his abstractions from nature, incorporating an horizon as he used random effects of pouring and staining.

In 1967, at the age of 20, The Whitney Museum of American Art invited Landfield to exhibit. He was also included in the Whitney’s biennials of 1969 and 1973. In 1969 he began showing with David Whitney Gallery in Soho. Also that year, architect Philip Johnson donated his important canvas “Diamond Lake” to the Museum of Modern Art.

Landfield’s work is in the Metropolitan Museum of Art, the Museum of Modern Art, the Whitney Museum of American Art, the Art Institute of Chicago and other important public institutions.