“My paintings reflect not only the life I lived and stories my grandfather told me, but America as it was long ago: when times were fairly straightforward and simple and there was a sense of magic all around us. The legacy of characters I knew and those my grandfather introduced to me fill my canvases with a sense of joy. Both real and imagined characters find their home in my work. I love my country, so my use of the American flag is not some politically correct statement for me – I’ve used them from the start. What I hope is that when people view my work they feel the same joy I feel that I do as I create each piece. People ask me how I can come up with so many different scenes and topics and I reply that I’ve kept my eyes and ears open for many years, now, (I was born in 1932) so there’s lots to paint!”

“Rosebee” was raised in a New England town by her grandparents. Her grandfather was a whaler, and many of her paintings are inspired by her recollection of stories he told to her as a child – about sails, and whales and mermaid tails. Her grandmother was a quilter, and quilt patterns are very much in evidence in nearly all of Rosebee’s paintings.

Rosebee came to painting late in life. Self-taught, she was prompted to begin painting because she wanted to create a visual record of all of her happy childhood memories. In the process, she has gained both widespread popularity and recognition. In 1987, for example, she was named the Most Promising Marine Painter in the Country by the Mystic Seaport Maritime Gallery. Her paintings are in the permanent collection of a number of prominent art museums, including The Peabody Museum, Salem Massachusetts; The Springfield Museum of Fine Art, Springfield, Massachusetts; The Barnum Museum, Bridgeport, Connecticut; The Heritage Plantation, Sandwich, Massachusetts; and the Custom House, Salem, Massachusetts. 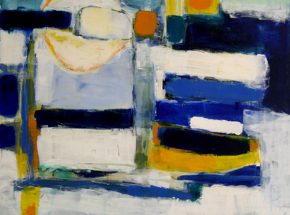