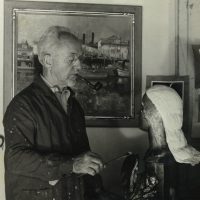 Roy Ropp was born in Kansas, and moved to Laguna Beach, California at age 33. He worked as an insurance agent and builder, painting in his leisure time and getting involved in the local art scene. During the 1920’s, the local art association turned the town’s old community center into a small one-room gallery. The popularity of this gallery led to a larger permanent gallery, and it has since grown to become the Laguna Art Museum of today.

In a local effort to help end the doldrums of the Great Depression, Roy helped conceive, promote, and establish The Pageant of the Masters, a Laguna Beach Festival of the Arts. The plan was to hold a summer art festival the week following the1932 Los Angeles Olympics. The organizers hoped Olympic visitors would extend their stay and take in the Laguna Beach event. The whole town got involved, and Laguna Beach was transformed into a huge art gallery. There were art exhibitions, plays, outdoor pageants, a parade, street markets, colorful lights, a costume ball, and tours of artists’ studios. Local stores featured the work of local artists and some set up booths to show and sell their work. By the end of the festival, Laguna Beach had established itself as an artist’s haven, and a stop on the map for all California art lovers.

As early as the 1930’s, as celebrities established second homes in the Palm Springs area, artists followed to make sales to hang on those celebrity home walls. Roy was one of the Laguna Beach artists to make trips to Palm Springs. He fell in love with the desert. He was an admirer of Native Americans, as can be seen in his canvases depicting the Cahuilla Indians. In 1936, when Highway 99 was paved to the high desert of Joshua Trees outside the Coachella Valley, the town of Twentynine Palms grew. Roy, realtor and builder, was involved. As subdivisions were laid out, Roy was named by the Twenty Nine Palms Corporation to oversee sales.

In his spare time, he and his wife Marie worked toward establishing a Twentynine Palms Art Center, helping form an Art Guild with eight original members. Although they were interrupted by World War II, they finally accomplished their dream. The group met in members’ houses, including a recorded meeting at John W. Hilton’s Flying W Studio. When Roy retired in 1961, he dedicated his energies to his painting. He moved to the desert north of Palm Springs and became a full time member of the fraternity of desert painters. He painted and taught classes during his retirement.