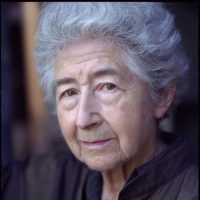 Ruth Duckworth (April 10, 1919 – October 18, 2009) was a modernist sculptor who specialized in ceramics. Her sculptures, as well as wall sculptures and monumental works, are mostly untitled. She is best known for Clouds over Lake Michigan, a wall sculpture.

Born Ruth Windmüller on April 10, 1919 in Hamburg, Germany, she took up drawing after a doctor recommended that she remain homebound to improve her health. She was the youngest of five children. The oldest, a brother, had promised to watch over her for the rest of her life but was killed when his ship was sunk by a Japanese submarine. The daughter of a Jewish mother and a Lutheran father, she left Germany to study at the Liverpool College of Art in 1936 as she could not study art in her home country under the restrictions imposed by Nazi Germany. She later studied at the Hammersmith School of Art and at the City and Guilds of London Art School, where she used the stone carving skills she learned there to decorate tombstones. When she applied for art school she was asked if she wanted to choose to focus on drawing, painting or sculpting and insisted that she wanted to study all of them, after all Michelangelo did all three.

Inspired by an art exhibit of works from India, Duckworth studied ceramic art at the Central School of Arts and Crafts starting in 1956. While her early ceramic work was in traditional forms, she started to produce more abstract works that incorporated materials such as pebbles and rocks. Her work started to fall into a middle ground that wasn’t the typical ceramics thrown on a wheel and fired in a kiln or the standard forms of sculpture that used metal, stone or wood. As described by ceramist Tony Franks, Duckworth’s style of “Organic clay had arrived like a harvest festival, and would remain firmly in place well into the ’70s”. While ceramists such as Bernard Leach rejected her work, other artists in the UK started adopting her style of hand worked clay objects.

Joining the faculty of the University of Chicago in 1964 gave Duckworth the opportunity to create grand pieces that included swirls and cloud patterns. Her mural series Earth, Water and Sky (1967-68) was commissioned by the university for its Geophysical Sciences Building and included topographical designs based on satellite photographs with porcelain clouds overhead. Her 1976 work Clouds Over Lake Michigan is a figurative depiction of the Lake Michigan watershed and is on display at the Chicago Board Options Exchange Building. While at the University of Chicago, Duckworth had a studio in the Pilsen neighborhood in the Lower West Side of Chicago.

She remained in Chicago after retiring from the university in 1977 and moved to a space in the Lakeview neighborhood on the city’s North Side, in a former pickle plant. She had a hole in the floor of her second-floor living quarters, which allowed her to view works in progress in her studio and to envision how they would look on a wall. There she created large bronze works for Eastern Illinois University, Lewis and Clark Community College and Northeastern Illinois University. 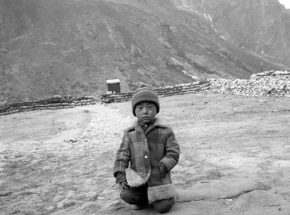