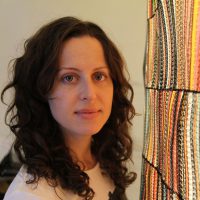 Sabrina Gschwandtner lives and works in Los Angeles, CA.
Her artwork, comprised of film, video, photography, and textiles, has been exhibited in the United States as well as internationally at institutions including the Smithsonian American Art Museum in Washington DC; the Museum of Arts and Design in New York; and the Victoria and Albert Museum in London.
Her work has been featured and reviewed in the New York Times, Modern Painters, Artforum, Frieze, Cabinet, the Washington Post, Der Standard, and on NPR and Bloomberg News, among other media outlets and scholarly publications.
She has been awarded residencies at Wave Hill (2012), the International Artists Studio Program in Sweden (IASPIS, 2009), the Museum of Arts and Design (2009), and the MacDowell Colony (2007 and 2004).
Her work is held in the permanent collections of the Smithsonian American Art Museum; Museum of Fine Arts, Boston; the RISD Museum; the Philbrook Museum of Art, and the Carl and Marilynn Thoma Art Foundation, among many other public and private collections worldwide.
From 2002-7 she edited and published the ‘zine KnitKnit, which is now in the permanent collections of The Museum of Modern Art, the New York Public Library, and the Fine Arts Library, Fogg Art Museum at Harvard University.
She received a BA with honors in art/semiotics from Brown University and an MFA from Bard College. 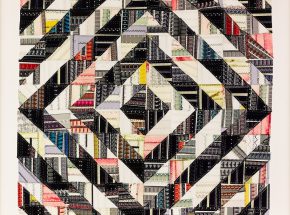