Sabrina Thompson is a filmmaker, photographer and owner of Kuu productions, a media production company based in Brooklyn, New York. Thompson was the lead photographer for the historic Women’s March on Washington in 2017. She is a former high school teacher, television producer and the co-founder of WEEN (Women in Entertainment Empowerment Network), a women’s nonprofit based in New York City. Thompson is a graduate of the University of North Carolina at Chapel Hill and Long Island University. In 2012, she went on an adventure of a lifetime and appeared on SURVIVOR (One World) on CBS where she was the runner-up of the Emmy award-winning program. 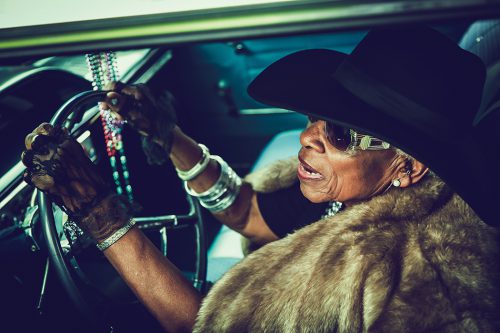 Sabrina Thompson, Angela The Icon, Washington, DC, Photo printed on gatorboard, Overall: 20 × 30in. (50.8 × 76.2cm), Courtesy of the artist and MFON: Women Photographers of the African Diaspora