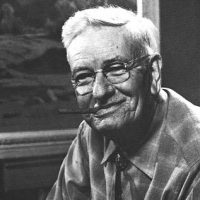 Born to a working-class family in Brentford, Middlesex, England on February 2, 1889, Sam Hyde Harris was the eldest son of his father’s second wife. She died when Sam was three years old, leaving his father with seven children. During his ensuing childhood years, a strong influence on young Sam was an old and invalid artist who befriended the boy and encouraged his interest in art and painting.

In 1904, when Sam Harris was 15 years old, the entire family emigrated to the United States, going directly to the Los Angeles area where a relative owned extensive acreage. While his father and older brothers began a tile and roofing business, he determinedly pursued his interest in art, gaining a variety of jobs in advertising art. “I did everything from show cards to wall work,” he claimed. “Wall work” consisted of sign painting on buildings–lettering sometimes six feet in height and on walls as much as six stories from the ground. Ultimately, he enrolled in evening classes at the Art Students’ League of Los Angeles and, later, the Cannon Art School. Thus he began a lifelong study of art in which he worked under some of California’s foremost teachers and artists: Stanton MacDonald-Wright, Frank Tolles Chamberlain, Lawrence Murphy, Will Foster and Hanson Puthuff.

In Los Angeles he developed a solid commercial art business, designing and printing advertisements and posters for such prestigious clients as the Southern Pacific, Union Pacific and Santa Fe railroads and the Pacific Electric or “Red Cars.” His posters, many of which are held in collections today, are fine art in themselves and demonstrate Harris’s characteristically strong composition The well-known windmill logo he designed for Van deKamp’s Bakeries remains as their corporate identity symbol.

Although his full-time vocation was always to be commercial art, his passion and pursuit of easel painting started early and paralleled his entire career. In 1913, at the age of 24, he spent six months in Europe, visiting his homeland and studying the art of the Old World. He traveled, viewing masterworks to be found in the great museums and galleries of England, Holland, France and Germany. He was profoundly impressed by John Constable and Joseph Turner and his later preoccupation with light and atmospheric effects in landscapes undoubtedly was born with those early impressions· Returning to California, he resumed his commercial art career, and in 1917, married Phoebe Mulholland, niece of William Mulholland of Los Angeles water district fame. They had three sons, one of whom also pursued a career in art–Sam Hugh Harris of Carmel.

During the Depression years, in an effort to make ends meet, Harris turned to teaching art part time and found a new love. His interest in students and their attraction to him continued long past his days of hardship. For many years, he taught at Chouinard Art Institute and his superb lettering and “how to” techniques were included in books for students of advertising art. Through the years he also conducted art classes for private community organizations, such as the Ebell Club of Los Angeles, the Spectrum Club of Long Beach, the Friday Morning Club of Los Angeles, and the Glendale Tuesday Afternoon Club. With the Businessmen’s Art Institute of Los Angeles he developed a special relationship, conducting classes and weekend painting tours that took them to scenic areas such as Laguna Beach.