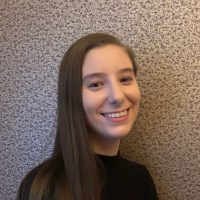 In my artwork, I focus on the idea of an individual traveling through a space; exploring place through architecture and landscape, abstracted through line, shadow pattern, contrast, and negative space. I am interested in dynamics, what can and can’t be seen. The seemingly mundane aspects of everyday life, one light shining through the square of a window frame, or the corner of a plant casting shadow on glass. Influenced by photography and film, my work investigates the stillness of night; the frozen moments before something happens. It exists in the “in between”, the time when your eyes adjust to the contrast of natural illuminated light and the depth of darkness. I feel immersed, traveling through such spaces. Each piece has reference to an environment, while existing in its own space.

Samantha Morris grew up Madison, Connecticut; she now lives and works in Brooklyn, New York. Morris graduated from The University of the Arts in 2017 with a BFA in Fine Arts with an emphasis in Painting and Drawing. In addition, she will begin her graduate studies in the MFA Fine Arts program at Pratt Institute in September 2019. Recent solo exhibitions include: Kanna Rými, Listhús Gallery in Ólafsfjörður, Iceland; and BFA Thesis Exhibition, The Space Between, The University of the Arts. Selected group exhibitions include Black and White, Site:Brooklyn, Paperworks, b.j spoke gallery and Space Invaders, Fountain Street Gallery among others. Morris’ work has been published in FreshPaint Magazine, Opción Magazine, ArtMaze Magazine and Underground Pool.