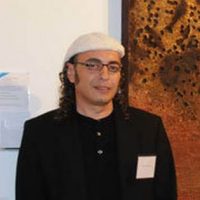 Sami Al Karim, an Iraqi artist born in 1966 in Lebanon, has been practicing contemporary art for the last 20 years and is an established and successful creator of design, emotion and expression. He lives and works in America, where he graduated with a BFA honor degree in Fine Art from the University of Colorado in 2008. Al Karim’s background specializes in sculpture, painting, video art and photography. Al Karim comes from a life of culture and education. His father was a professor in American University in Beirut, Lebanon, where Sami Al Karim grew up. In 1974, Al Karim’s family moved to Baghdad, Iraq and he attend in the Academy of Fine Arts in Baghdad in 1985.

Al Karim has been influenced in Sumerian and Babylon civilizations, which clearly defines his earlier works. Al Karim started to protest against the Albaath regime through his artwork which brought him into conflict with the regime in Iraq. He was forced to leave the school and escape from his country as a refugee in several countries seeking the security for his life. However, Al Karim has never stopped working and has participated in both solo and group shows internationally.

“My work is based on optical mixing theory and the study of light placement using hand made paper, resin, gel medium, multiple layers, gold powder, gunpowder, metal powder pigment and minerals pigment. Using different materials and techniques, I create the heavy texture and depth along the surface of this work. The pigments that I used in this series of paintings will absorb different lighting techniques such as blue and yellows differing from natural sunlight to artificial light behavior. The concept behind my artwork is not a message, but a statement that we as humans, good and evil, are all servants of love. This emotion can take even the darkest hearts and make them pure as the day of their birth. While I am creating my artwork and beginning to express myself, all sense of time and space fade.”