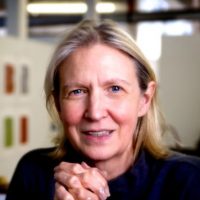 Armstrong’s early period with the exploration of sound had exhibitions at the Visual Arts Gallery at UAB and the Birmingham Museum of Art, Birmingham, Alabama. Her first exhibition in New York City was at PS1 in 1982, “’the Sound Corridor’” curated by William Hellermen. This installation began her multimedia series of work entitled “’Airplayer’” which ended in 1992 at the CB’s 313 Gallery and Bar (next door to CBGB) on the Bowery with “‘Airplayer XIV'” – both installations utilized mechanisms for movement and sound. Armstrong’s work has been published extensively.