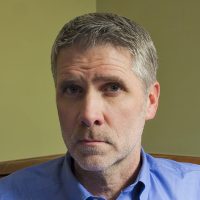 Shayne Hull is a Louisville-based painter and sculptor. His work has been shown in over 155 exhibits since 1992, including 25 solo exhibitions, and can be found in the permanent collections of Brown-Forman, 21C Museum and The Kentucky Arts Council.

Hull describes his work this way: “I deal primarily with the human head and face, emphasizing fleshiness, color, form and expression. Content-wise, I enjoy using exaggeration, distortion and dark humor to express the human condition… and sometimes I use exaggeration, distortion and humor just ’cause I feel like it. I don’t have an agenda, but if I was forced to find one in my work, it would be along the lines of a Chuck Close quote that “I paint pictures for people to look at.” Sometimes, (and currently), so much art is about political, social, gender, racial, environmental, global issues that the seriousness of it all can be overbearing. Sometimes, simply making a picture for someone to enjoy looking at is the noblest goal. Ultimately, the highest compliment I could ever hope to receive is for someone to view my paintings and say, “Whoa, that’s pretty cool!”

In 2002, Hull was one of 20 U.S. painters invited to participate in “The Face of Courage”, a nationally traveling exhibition commemorating the fallen heroes of 9/11.

In 2005, his paintings were selected for display in Riga, Latvia as part of the U.S. Art in Embassies Program. Also that year, he was commissioned to create the now-much-publicized “Portrait Wall” at 21C Museum in Louisville, painting 100 twelve-inch portraits of prominent Louisvillians.

Recently, Hull has stepped outside of his studio work to design the Woodford Reserve Kentucky Derby Commemorative Bottle; the logo for the First Capital Bank ‘Live’ at the Clifton Center concert series; the CD cover for the rock and roll band Bodeco’s latest release, “Soul Boost”; and “Ribbons”, a 10′ x 20′ ceramic tile mural for Kosair’s Children’s Hospital in Louisville.

Among many accolades, Hull was previously named one of Louisville’s Top Visual Artists by Louisville Magazine and has received multiple awards, including the prestigious Al Smith Fellowship. Next up, his work will be featured in the Spring 2011 issue of Studio Visit Magazine and he will have a solo show of pastel portraits at Swanson Reed Contemporary.